A convection toy problem or Can you find the diffusion

In last weeks Physic's Friday blog post we continued our discussion of convection in PDEs. We mentioned upwind schemes - a class of numerical discretisation methods for solving hyperbolic partial differential equations. Today I try to show you the application of unwinding schemes using a simple but meaningful example, the hyperbolic linear advection equation.

Discretising the spatial computational domain yields a discrete set of grid points x(i). The grid point with index i has only two neighbouring points x(i-1) and x(i+1). If a is positive, the left side is called upwind side and the right side is called downwind side (and vice versa if a is negative). Depending on the sign of a it is now possible to construct finite difference schemes containing more points in upwind direction. These schemes are therefore called uwpind-biased or upwinding schemes.

The figure shows sets of discrete points with indices {i-1,i,i+1}. The formulation of the first derivative by finite differences depends on the sign of a. Upwinding schemes consider the ”flow”-direction of the information and only take the cor- responding points (marked with dots) into account. The left part of the figure shows the points used for a first order upwinding scheme for a > 0. The right part of the figure shows the same for a < 0. The discretised version of the above equation using a first order upwind scheme is given by:

If we apply this scheme to a function (some sort of Gauss peak) with homogenous Dirichlet boundary conditions (we chose the size of the simulation box in a way to justify the boundary conditions) we would expect that the peak is propagated as a function of time without changing its shape. The following figure shows the result at different times ... 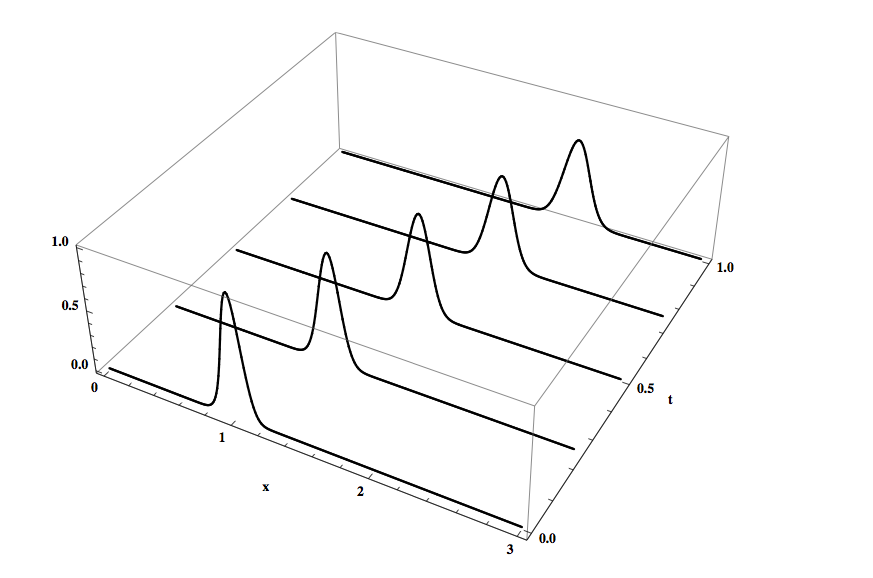 Obviously the peak broadens when propagating through the time - is diffusion the reason for this ? And if so, where does the diffusion come from ?